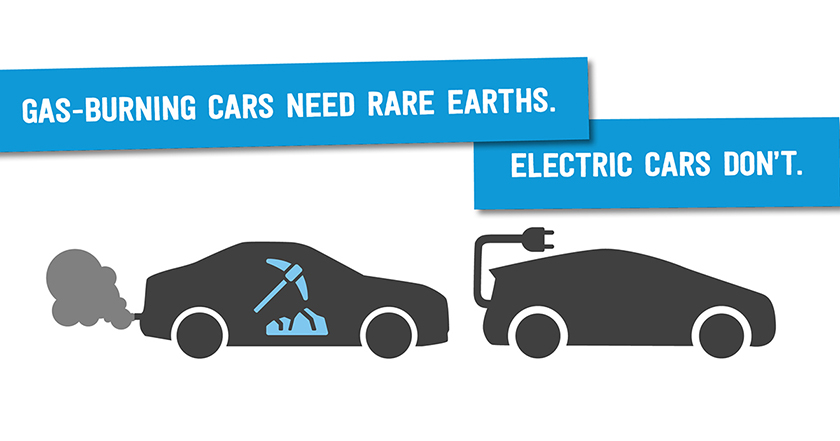 Fact: Electric car batteries don’t use much rare earth materials, but do use the same battery materials as most consumer electronics…and gas-powered cars.

Myth: EV batteries are dirty and dangerous and full of rare earth metals.

Explanation: Many EV critics will portray the electric battery as toxic and dependent on a number of rare earth metals mined from conflict regions. It is true that cobalt and lithium are widely used in many EV batteries; however, neither are rare earth metals.

This isn’t to say they aren’t problematic — cobalt mining in particular is plagued by some very serious environmental and labor problems, as documented in in-depth reports by Amnesty International and the Washington Post. But these problems are economy-wide. Cobalt is used widely in the lithium-ion batteries that power most cell phones and laptops. There’s no question that lithium-ion battery manufacturers have to clean up their supply chains, but that’s something that Apple and Panasonic and Samsung are as responsible for as Tesla and Ford and General Motors.

Finally, some critics will claim that EVs are dependent on cerium, most of which comes from China. In reality, only some hybrids use cerium in their nickel metal hydride batteries, but it is also dusted onto every catalytic converter fitted into any internal combustion vehicle.

Traditional internal combustion engine vehicles—those that run on gas and diesel—actually rely on rare earths more than EVs, both in the vehicles themselves, and through the very production of the gasoline and diesel that power them.

According to the Chemical Economics Handbook published by IHS Markit, the largest market for rare earths are for magnets, mostly using the so-called “technology metals,” which are used in everything from electric motors to lasers to cancer treatment to nuclear reactors to commercial lighting.

The second largest market by volume for rare earth minerals is for cerium oxide compounds used in polishing powders for steel production. It’s also dusted onto every catalytic converter fitted into an internal combustion vehicle. In other words, every gas-powered vehicle relies on cerium, one of the rare earths singled out by anti-EV forces as being a “dirty” feature of electric vehicles.

The next largest use of rare earth minerals is for a product used in petroleum refining, known as “fluid cracking catalysts (FCC).” According to researchers with Grace Davison Refining Technologies, “rare earth metals are a key component in fluid cracking catalyst,” a chemical process that was pioneered by Socony Mobil Oil in the 1960s. In fact, roughly 11 percent of all rare earth materials produced are used in oil refining processes, according to the Rare Earth Tech Alliance.

The refining of crude oil into gasoline and diesel requires the rare earth lanthanum.