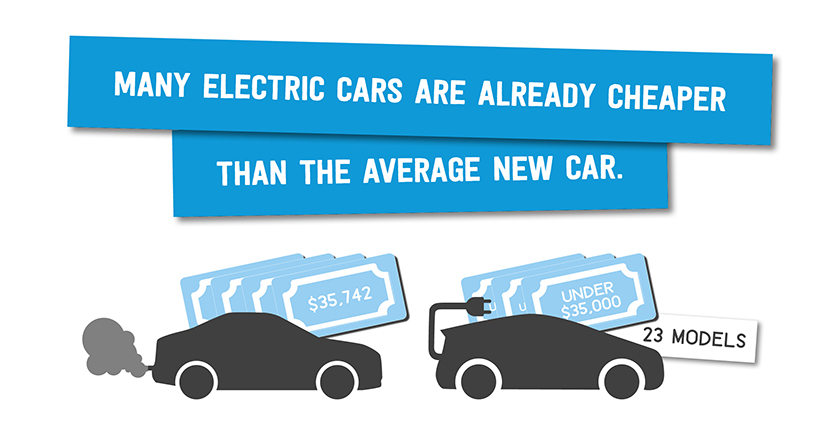 Fact: Many EV models available today are cheaper than the average cost of a new car

Explanation: American car buyers can currently (as of February 2019) find at least 23 plug-in models that cost less than the average cost of a new car sold in the United States.

According to the Kelley Blue Book, as of September 2018, the average cost of a new car (or light vehicle) sold in the United States was $35,742. Ten all electric vehicles and 13 plug-in hybrids are currently available in the U.S. for less than that cost, including SUVs, a minivan, crossovers, hatchbacks, and the Tesla 3.

On the used car markets, sellers have to “price in” the savings offered by the federal electric vehicle tax credit. Meanwhile, as the vast majority of EVs are leased, an increasing number of leased plug-ins hit the used car market every year, typically at prices well below their gas-powered counterparts.

As Consumer Reports stated in 2018, “For car shoppers who are interested in trying out electric-vehicle technology but who don’t have Tesla money to spend, now is a great time to buy an emissions-free car for less than $15,000.”

his post is one in a series produced to combat the misinformation campaigns  attacking electric cars. To see all of the FACTS that combat the MYTHS perpetuated by the Koch network and Big Oil, check out EV Facts.