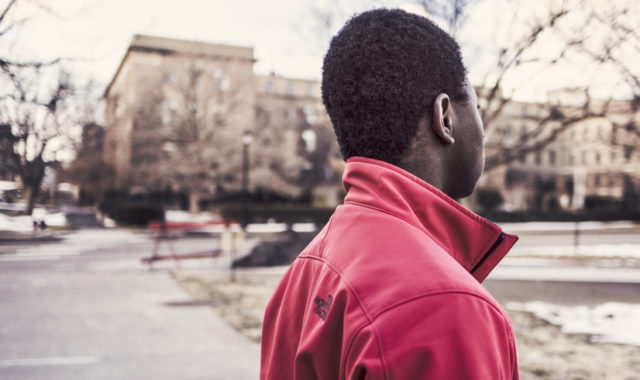 The fossil fuel industry’s effort to “start winning hearts and minds” arrived at a Baptist church in North Carolina recently in the form of three $1,500 scholarships for local high school students and a talk by Hubbel Relat, a Fueling US Forward representative, at a summit hosted by the Roanoke Valley Southern Christian Leadership Conference.

The $1,500 scholarships, which local news reports said were aimed to help the students pursue careers in the energy industry, were a part of a broader effort by Fueling US Forward to tout the “positives” of fossil fuels and to bring that message specifically to black communities.

That effort has gotten off to a rocky start. Last month, a front page New York Times feature profiled Fueling US Forward’s efforts to promote fossil fuels by getting an article published in The Atlantic (while failing to acknowledge the author’s job as a spokesperson for the group, causing the magazine’s editors to pen a public apology and add it to the top of the piece), running TV ads, and organizing feel-good events in black communities where attendees could win up to $250 off their utility bills.

“Eddie Bautista, executive director of the NYC Environmental Justice Alliance, a nonprofit that works with low-income and minority neighborhoods on environmental issues, called the [Fueling US Forward] campaign ‘an exploitative, sad and borderline racist strategy,'” The Times reported. “He pointed to the falling costs associated with renewable energy, which he said made shifting away from reliance on fossil fuels a winning proposition for everyone.”

The campaign’s missteps seem to have continued in North Carolina. Fueling US Forward is funded by Koch Industries, and Hubbel Relat, the Fueling US Forward representative who presented the $4,500 worth of scholarships, is the former associate director of another Koch-backed nonprofit, The Center for Prosperity and Freedom Foundation.

That center’s mission is to promote “limited government,” in part by slashing government programs — and it has repeatedly pushed to end student financial aid.

In one relatively recent example, the co-founder of the center, Relat’s ex-employer, called for the shutdown of the Department of Education.

According to its website, the Department of Education provides roughly “$150 billion a year in grants, work-study funds, and low-interest loans to more than 15 million students.”

On a small scale, Fueling US Forward’s handful of $1,500 scholarships seem to repeat a broader pattern that has caused scandals for the Kochs in the past.

In 2014, the Kochs sparked controversy after the deeply conservative brothers gave $25 million to the United Negro College Fund (one of the biggest donations in the fund’s history, to be used to distribute $5,000 scholarships) — while continuing their other efforts to slash federal programs.

“Programs such as Pell Grants, student loans, Head Start and others have helped countless Americans, of all races and ethnicities, [Marybeth Gasman, a professor of higher education and director of the Center for Minority-Serving Institutions at the University of Pennsylvania] said,” according to Inside Higher Ed at the time. “And these programs — endangered by the Koch political agenda of shrinking government — ‘have built the black middle class’ and will contribute to the advancement of black students who are still impoverished, she said.”

This January, the Charles Koch Foundation and Koch Industries reignited that controversy when they announced a $25.6 million gift to the Thurgood Marshall College Fund — to be used to create something called the Center for Advancing Opportunity — which plans to launch think tanks at historically black colleges and universities, make grants to faculty members, and fund student scholarships.

The strings attached to that gift have students worried. “When they give the donor control, the trade-off is academic freedom,” Ralph Wilson of Tallahassee, co-founder of a group called UnKoch My Campus, told the Washington Post.

The Kochs have a long-standing pattern of funding American colleges and universities — while sometimes requesting control over classroom curriculums, access to students’ names and email addresses, and even once, that a school change its very name. An investigative report published this month by PR Watch found that from 2005 to 2015, the Kochs’ foundations made donations to almost 400 schools, valued at over $141 million.

Relat himself is a graduate of George Mason University‘s law school. GMU was the biggest recipient of those donations, accepting a total of $95 million from the Charles Koch Foundation — not including an additional $10 million grant to the law school. That donation prompted the school to change its name to the Antonin Scalia Law School.

As of press time, Koch Industries had not responded to a request for comment from DeSmog. The Koch network has defended its funding of colleges and universities in the past. “Like many charities, the Charles Koch Foundation recognizes the importance of supporting a diversity of ideas so scholars and students can continue to push the frontiers of knowledge and help people discover new and better ways to live fulfilling lives,” a statement sent to the Atlantic read.

The Koch family itself has a long and troubling track record on race — a record that makes their network’s efforts to reach out to black communities about fossil fuels through vehicles like Fueling US Forward (and their other efforts examining mass incarceration) an uphill battle.

Charles and David’s father, Fred Koch, was a well known leader of the virulently racist John Birch Society. Charles Koch himself “was an active member of the controversial right-wing John Birch Society during its active campaigns against the civil rights movement,” the Progressive reported in 2014, before he left the organization in 1968, the year after his father’s death. In 2014, one of their secretive donor retreats featured a dinner talk by Charles Murray, the white supremacist author of the widely-debunked and notoriously racist book, The Bell Curve.

More recently, the Kochs have funded efforts aimed at criminal justice reform, attracting some limited support from community advocates who hope that bringing left and right together can propel forward movement on ending mass incarceration.

But while they’ll work with the Kochs when they offer to reform racial disparities in the criminal justice system — so severe that a black man born in 2011 has a one in three chance of winding up locked up while the ratio is one in seventeen for white men, according to the Sentencing Project — that support doesn’t extended into fossil fuel advocacy, some of those working with the Kochs have said.

“We are going to fight the Koch brothers tooth and nail on every aspect of their environmental agenda where we don’t agree,” Van Jones, a former Obama advisor turned political commentator, told the Atlantic in 2015, “and we are going to fight alongside them on every piece of criminal justice legislation where we agree.”

The Koch’s overall stance on education funding — handing out relatively small sums while working to undercut larger programs — has left organizations large and small confronting similar tensions. By sending Relat, the former associate director of an organization that promotes limited government and cuts to government programs, to announce a handful of $1,500 scholarships, Fueling US Forward highlighted exactly how close to the surface those tensions lie.