A coalition of conservative groups, many with close ties to the Koch brothers, are calling for Environmental Protection Agency (EPA) Administrator Scott Pruitt to strip California of its right to set stricter greenhouse gas limits for personal vehicles.

Not satisfied with Pruitt’s decision to rewrite the Obama-era emissions standards — which had been written cooperatively with the automakers, state of California, National Highway Traffic Safety Administration (NHTSA), and EPA — the American Consumer Institute (ACI) organized a letter to Pruitt calling “for the revocation of California’s waiver from the Clean Air Act, which allows the state to decouple from federal policy and impose strict emission standards on automobiles.”

When asked about this threat on the sidelines of the BNEF Future of Energy Summit, the chair of the California Air Resources Board, Mary Nichols, told Desmog, “I don’t think they’re going to do that.”

Commenting on the conservative organizations requesting that Pruitt revoke the waiver, Nichols told Desmog, “They’re the same groups that’ve been supporting Pruitt through all this other stuff.” 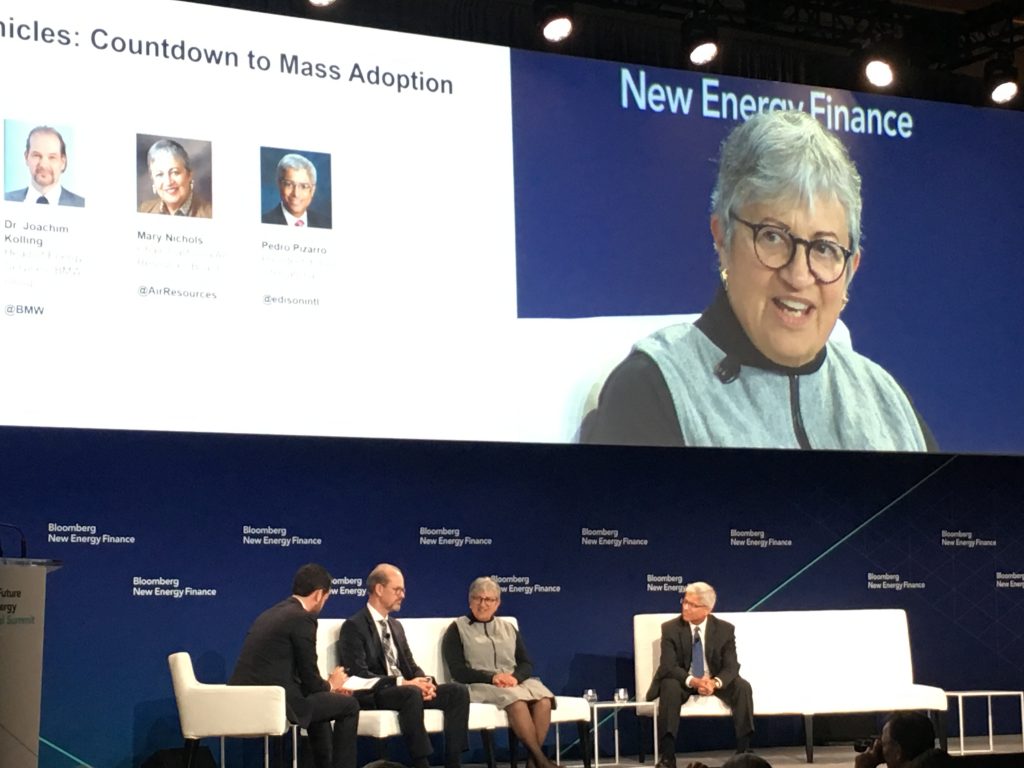 Mary Nichols (second from right) speaking on a panel about electric vehicles at the BNEF Future of Energy Summit. Credit: Ben Jervey

In the weeks leading up to his announcement about the emissions standards, Pruitt had taken a more antagonistic tone towards California, signaling that he might attempt to revoke the waiver that was granted by the Obama administration, per legal mandate, in 2009.

“California is not the arbiter of these issues,” Pruitt told Bloomberg News in March, adding that the state “shouldn’t and can’t dictate to the rest of the country what these levels are going to be.”

With the waiver in hand, California can continue to enforce current greenhouse gas emissions standards, despite whatever the EPA sets as the new national standards for model years 2022-2025. On top of that, any other state can choose to adopt California’s standards, which 13 other states and the District of Columbia currently have.

Because these states represent roughly one-third of the country’s personal vehicle market, automakers would have to decide whether to set up two different production lines for states following the California standards and the rest of the country, or whether to treat California’s targets as a de facto national standard.

Predictably, the automakers, through the powerful Auto Alliance and Global Automakers trade groups, are calling for one national regime, which could result from a grand bargain like the one that Pruitt just scrapped, or could be delivered by Pruitt stripping California of its waiver.

Any attempt at such a repeal would be hugely controversial, and possibly illegal, due to many nuances in the Clean Air Act and the history of its application and enforcement. A waiver granted to California under the Clean Air Act has never been revoked, and has only been denied once.

Notably, that lone denial came in December 2007 when William (Bill) Wehrum, who ran the EPA’s clean air division at the time, convinced then-EPA Administrator Stephen Johnson to reject the state’s request to set its own greenhouse gas standards for vehicles, the very issue at hand today.

(California was later granted that same waiver in 2009 under the Obama administration, after the state sued the EPA, and after the Supreme Court had held in 2007 that the EPA was required to regulate greenhouse gas emissions. For a much more comprehensive background on California’s waiver and Wehrum’s opposition, see this recent Desmog article.)

Today, Wehrum is again the air chief at the EPA, and is again in a position to attempt to strip California of its unique authority to set its own air pollution limits. As Wehrum, Pruitt, and EPA policymakers work to figure out the new national emissions standards for cars and light trucks, they are hearing from groups including the American Consumer Institute and its Koch-tied coalition on the importance of revoking the California waiver.

Who Are the Groups Fighting California’s Clean Air Act Waiver?

The ACI letter to Pruitt, dated March 28, 2018, was signed by representatives from 11 groups, eight of which have known ties to the Koch network, and all of which are routine commenters on conservative issues.

The American Consumer Institute (ACI) is credited with organizing the coalition, and the letter is signed by its President Steve Pociask. The group is best known for opposing net neutrality efforts while being funded by a major internet service provider (ISP) lobby, as journalist Lee Fang detailed for VICE. More recently, Pociask has turned his attention to attacking electric vehicles, writing on Forbes that “the science on electric vehicles does not support continuing California’s waiver.”

Less Government is an “organization dedicated to reducing the power of government and protecting the First Amendment from governmental assault,” which was founded and run by Seton Motley, who is also listed as a Policy Adviser to the climate science-denying Heartland Institute. Though Motley and his Less Government org have their roots in telecom and media issues, he has in recent years engaged more on climate and energy issues, signing some anti-wind energy letters organized by the Koch-backed Americans for Prosperity and writing a bit on electric vehicles.

The Taxpayers Protection Alliance (TPA) is part of the network of front groups funded by the Koch brothers and their donor network through the Center to Protect Patient Rights (now called American Encore), and Freedom Partners. As the Energy and Policy Institute has described, “TPA essentially exists as a shell for its advocacy, based on its own IRS form 990s: ‘The Taxpayers Protection Alliance has given control of the management duties and the daily activities of the organization to MLM Consulting, LLC (MLM). MLM will be responsible for managing the organization and work to support the exempt purposes of TPA. The President of TPA, David Williams, is the sole owner of MLM Consulting LLC.'” Williams signed the ACI letter to Pruitt. TPA has fought clean energy policy in the past using the website SolarSecrets.org and has published white papers arguing against solar energy tax credits.

Consumer Action for a Strong Economy is run by Matthew Kandrach, and has been linked to a number of coalition efforts stemming from the FreedomWorks organization, which was born of a merger between the Koch-founded Citizens for a Sound Economy (CSE) and Empower America.

American Commitment is run by Phil Kerpen, a former Vice President of Americans for Prosperity. The organization was founded by Sean Noble, a right-wing operative with close ties to the Koch brothers who also runs the Center to Protect Patient Rights (American Encore), a major funnel for Koch donor network money to front groups.

FreedomWorks was, as mentioned above, born of a merger between the Koch-founded Citizens for a Sound Economy (CSE) and Empower America, though it has no known Koch ties at present day. The group was described in a 2012 article in Mother Jones as “one of the main political outfits of the conservative movement and an instrumental force within the tea party.” It pushes free market policies and has questioned the well-established science linking human activity to a warming planet.

The Competitive Enterprise Institute (CEI) is a conservative advocacy group dedicated to “economic freedom” that has received funding from ExxonMobil, Texaco, and the family foundations of the Koch brothers.

Americans for Tax Reform (ATR) is an anti-tax group that has received funding from the oil and gas lobbying group, the American Petroleum Institute, along with various groups in the Koch network such as the Claude R. Lambe Charitable Foundation and the Center to Protect Patient Rights, as well as DonorsTrust.

The 60 Plus Association describes itself as the conservative alternative to the American Association of Retired Persons (AARP) and receives significant funding from groups connected to the Koch brothers. The group has also received funding from the American Petroleum Institute, and was created by Sean Noble (see American Commitment above). Noble was until recently a consultant for the Arizona Public Service utility company, and has led efforts in Arizona to kill solar-friendly legislation.

Frontiers of Freedom, run by George Landrith, has received significant funding from Exxon, the Koch brothers, and dark money organizations like Donors Trust. In 2015, Landrith launched the Energy Equality Coalition to battle against the federal electric vehicle tax credit. The coalition also includes David Williams of the Taxpayer Protection Alliance and Horace Cooper, a senior fellow at the Heartland Institute. Landrith is also a director of the National Center for Public Policy Research (NCPPR).

The Center for Freedom and Prosperity was once funded by the Charles Koch Foundation and has actively lobbied for more liberalized tax laws, and for less scrutiny towards offshore tax havens.

Seven of the organizations that signed this letter to Pruitt — and five of the actual representatives who signed — also recently penned a letter to the U.S. Food and Drug Administration (FDA) defending “electronic and heat-not-burn” tobacco products (or vaping products), indicating that this network is defending the tobacco industry as well as oil and gas companies.

California and Partner States Fight Back

Nichols has signaled that California will not be retreating from its strong standards.

“California will not weaken its nationally accepted clean car standards, and automakers will continue to meet those higher standards, bringing better gas mileage and less pollution for everyone,” Nichols wrote in a statement emailed to reporters. “This decision takes the U.S. auto industry backward, and we will vigorously defend the existing clean vehicle standards and fight to preserve one national clean vehicle program.”

California Attorney General Xavier Becerra has also said that California is prepared to sue if the EPA moves to weaken the vehicle emissions standards.

“We are going to do everything that can been done to defend these standards,” Becerra told Reuters last week. “So far, when we have been challenged on environmental standards we have had a good record in court. We haven’t lost a case.”

Under the Clean Air Act, the EPA is required to grant California a waiver on air pollution emissions standards if the state has “compelling and extraordinary circumstances,” which California argued a decade ago, and which the Obama administration agreed that it does. To revoke the waiver, the EPA would legally have to prove that those circumstances are no longer there. To satisfy the courts in California’s inevitable legal challenge, this would require a comprehensive and scientifically rigorous analysis.

At the BNEF Future of Energy Summit on April 10, Nichols said, “The document that came out a week ago from the administrator did nothing to change the nature of the debate. It expressed Mr. Pruitt’s view but there was absolutely nothing new in the way of data or analysis to support that view.”

She did indicate that she would be willing to sit down with the EPA and automakers to look at some “minor adjustments” to the technical changes measuring how companies could comply, but not the targets themselves. She provided an example related to electric vehicles. “Under the 2012 rules [car companies are] responsible for upstream emissions of power plants for charging EVs [electric vehicles]. I don’t think that’s a great idea. I didn’t think so at the time.”

However, “if the whole system is up for reexamination,” said Nichols, “then that’s a whole different story … That’s a different fight. And we would win it.”

It’s also clear that other states would have California’s back and join a legal fight, or start their own. Attorneys general from 11 states said last week in a statement that they would defend California’s right to set firm standards.

“By cooking the books on its review of national auto emissions standards, the Trump administration is putting special interests ahead of New Yorkers’ health and wallets,” said New York Attorney General Eric Schneiderman. “We stand ready to take legal action to block the Trump administration’s reckless and illegal efforts to reverse these critical standards and the gains we’ve made in ensuring cars are more fuel-efficient and less polluting.”

This article was originally published on Desmog.