The American Energy Alliance (AEA), a free market group with close ties to the Koch brothers, just released misleading results of a poll concerning the environmental virtues and federal support of electric vehicles, and voter opinions on auto efficiency standards.

Though the poll showed that Americans overwhelmingly view electric cars as better for the environment, and a majority believe in the necessity and value of fuel economy standards, the AEA is claiming that Americans don’t support EV-friendly policies. Not surprisingly, most of the questions in this push poll were worded to influence the respondent’s choice, framing federal programs as anti-choice and taxpayer-supported.

Let’s consider the messengers: both the group that commissioned the poll and the polling firm itself.

The American Energy Alliance is a self-described “advocacy” organization. According to its website, the AEA “engages in grassroots public policy advocacy and debate concerning energy and environmental policies.”

The poll was conducted by MWR Strategies, which is a lobbying firm with clients including Koch Industries and the American Fuel & Petrochemical Manufacturers. MWR Strategies was founded by Mike McKenna, a longtime energy lobbyist who was forced out of Virginia politics during an ethics scandal of his creation.  McKenna would later  lead President Trump’s energy transition team before choosing to resign rather than de-register as a lobbyist. Coincidentally, McKenna was replaced as the head of the energy transition team by Pyle.

Considering the organizations involved, it’s not surprising that the poll was a classic “push poll,” which the American Association for Public Opinion Research (AAPOR), the American Association of Political Consultants (A.A.P.C.), the Council for Marketing and Opinion Research (CMOR) and the National Council on Public Polls (N.C.P.P.) have all dismissed as “negative campaigning disguised as a political poll.”

The actual questions, which can be seen here, aren’t provided in any of AEA’s publicizing of the poll results. The questioner repeatedly manipulates respondents by implanting the idea that consumers are being forced to buy certain vehicles, and that they as taxpayers are being forced to pay for federal programs that support electric vehicle sales.

Some questions even include demonstrably false data to sway responses.

For instance, one question states that every purchases of an electric is is paid “75 hundred dollars” by the “taxpayer,” which is a gross misrepresentation of the non-refundable electric vehicle tax credit. In actuality, the tax credit simply lowers the buyer’s tax rate in the year of purchase—functionally the same way that a home mortgage interest deduction or child tax credit works.

Another question claims, without evidence, that that the average income of an electric car buyer is $150,000, then asking whether the respondent thinks it’s “fair” that the buyer should “be paid 75 hundred dollars.” As of 2016, 54 percent of EV purchasers have a household income above $100,000. Additionally, most EVs are leased, and not purchased, and only 38 percent of EV lessees have a household income above $100,000.

The most damning abuse of push polling is evident in a split-sample, where the interviewer used two different wordings to ask a similar question. 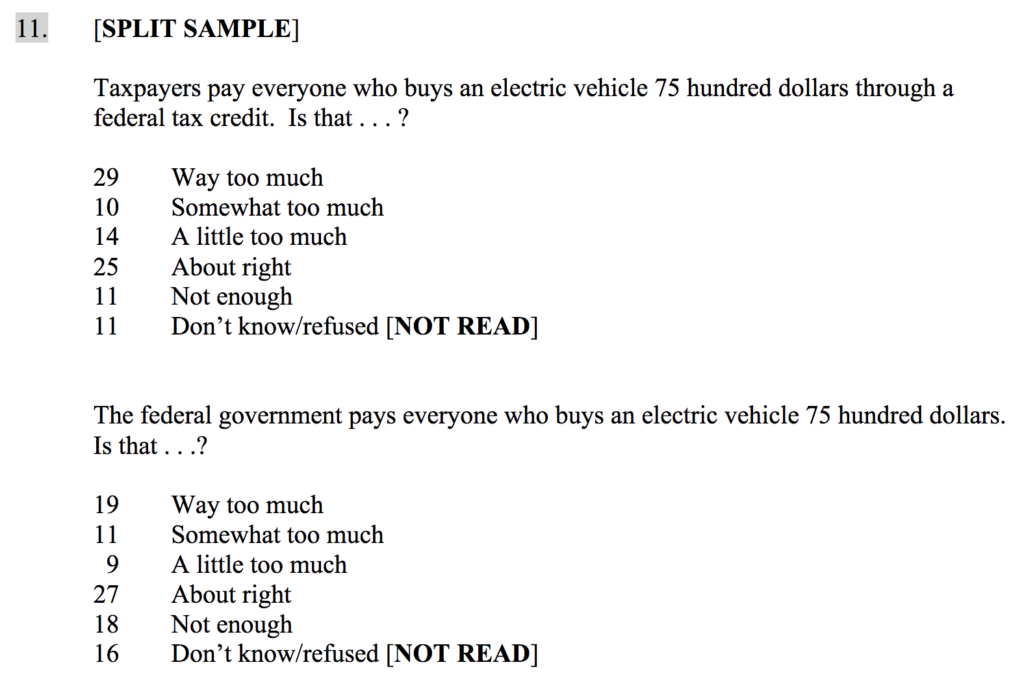 First, they set up a question to deliberate make the respondent feel a personal sacrifice: “Taxpayers pay everyone who buys an electric vehicle 75 hundred dollars through a federal tax credit.” When framed as such, a plurality (29 percent) answered that this was “way too much” and 25 percent said it was “about right.”

When the question was set up without a direct emotional connection to taxpayers, the results were much different. After hearing, “The federal government pays everyone who buys an electric vehicle 75 hundred dollars,” the percentage of respondents that said it was “about right” rose to 27 percent, the most of any category. Those who said it was “way too much” dropped to 19 percent.

Even the second wording is misleading—as a) it’s not a payment from the government, b) not all buyers of EVs qualify for the tax credit, and c) most EVs are leased and not purchased. Yet even with this deliberately misleading framing, a plurality of respondents agree that the current federal EV tax credit gets it “about right.”

As it has promoted this poll, the AEA hasn’t highlighted the results of the questions about corporate average fuel economy (CAFE) standards. That’s probably because the public voiced overwhelming support for federal fuel economy standards, despite the persuasive anti-regulatory framing of the questions.

A 56 percent majority of respondents said that the federal fuel economy program “made sense,” even when the interviewer inaccurately said that it “encourages the sale of small cars and electric vehicles.”

A plurality, 39 percent, agreed that the “mandate” was still needed, even “given the surge in oil and gas production in the United States in the last few years.”

All told, 45 percent of respondents favored the federal government’s CAFE standards program, and only 34 percent opposed it.